As part of a five-person relay team, I recently swam the English Channel. It was this year’s BHAG (big, hairy, audacious goal) and the culmination of many months of training. With the exception of our OWS (open water swim) coach Pete, Team H2 Oh! all learnt to OWS in the last three years or less. The event was pretty epic and here I reflect on my experience.

As you gaze back at the white cliffs of Dover, they never diminish in size when you are tracking your progress across the Channel.

Swimming the English Channel can be scary at times; the most significant moment for me being when it was my turn to drop off the side of the boat into the dark, inky black waters below, with no opportunity to acclimatise to the cold waters. My first swim was at 5.20 am, before sunrise, with no guiding moonlight, only a floodlight blazing from the boat’s roof which cast a pool of light on the water. From this, the captain would track me on a camera in the wheelhouse.

Every alternate breath I moved – sometimes behind, ahead or too close to the boat – as the swell of the Channel currents pitched me around. Occasionally the sound of the boat’s klaxon would warn me that I was swimming off-course and that I needed to reposition myself. As time passed, the skyline started to change to a beautiful amber, contrasting against the blackness of the Channel. Watching it helped me remain in ‘my zone’ as I swam onwards.

The diesel fumes from the engine were acrid and overwhelming; it was impossible to avoid them. They made me feel sick, not just from the smell but the thought that there I was, in the middle of this big sea surrounded by fresh air, and yet, all I could smell was diesel!

Sunrise in the Channel is stunning and at 6.57 am we were rewarded with the most beautiful scene as daylight broke. 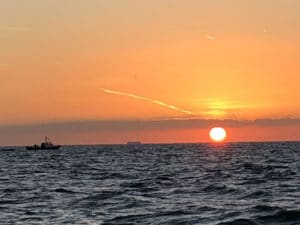 Surprisingly the water was warm (approx 17+ degrees) – who would have thought it! It was certainly warmer than water I’d swum in off the South Devon coastline. By the end of my first hour in the water, I was feeling hot!

By contrast it was very cold on the boat, which meant that every time I emerged from the warm waters into the early morning air, I became cold very quickly. I huddled up in 4+ layers of clothing, bobble hat, gloves and dryrobe cape whilst clutching a hottie to stop my teeth chattering.

The Channel is wide and the sea big. My final stint before swimming ashore was in the French shipping lane where the body of water around me felt enormous. Large swells of water would pick me up and push me forward. At times it felt like I was surfing. Occasionally, these swells would engulf me and, as I turned my head to breathe, I would find no air. As the swells moved past me I was momentarily left without water and my feet were kicking air. A couple of times I was even hurled out of the water and left snorting seawater from my nostrils – think marine iguana!

At one point my Garmin watch tracked me travelling 100 mtrs in 53 seconds – that’s four lengths of a 25 m pool in under a minute – I was flying. The currents on the French side of the Channel are the fastest and strongest.

The tankers and ferries in the Channel are huge and foreboding when you swim near them. It’s the busiest shipping lane in the world with over 600 tankers and 200 passenger ferries traversing it daily.

Swimming the English Channel is tiring. The boats that escort you double as fishing boats, so there’s a simple deck area to sit on, with nowhere to sleep. Not surprisingly, adrenaline and the anticipation of jumping overboard prevents you from feeling too sleepy!

We made good time across the Channel, with a little assistance from our skipper who helped to ensure we maintained a direct course. As this was not an official Channel Swim Association registered attempt, this was possible.

My relay swim in the Channel is most definitely the most epic challenge I’ve undertaken to date. I doubt I will have an opportunity to swim in such big seas again. I feel proud of my personal journey leading me to Team H2 Oh!’s swim across the English Channel. I never imagined that an enthusiasm for swimming at school would lead to a recent passion for OWS and a swim across the English Channel.

Knowing that my swim was raising money for a charity that helps elderly people in our society, who are alone and lonely, made the dark moments worthwhile. The thought that I was making a difference and people were depending on and supporting me, spurred me on.

I’m not sure what my next challenge will be – I understand more people have climbed Everest than swum the English Channel and whilst mine was not a solo swim – it was my Everest.

A heartfelt thank you to everyone who has supported me with kind, encouraging messages and sponsorship.

More details of my Everest can be found on the Team H2 Oh! Facebook page and Instagram.

If you would like to sponsor me, you can do so via my JustGiving page. 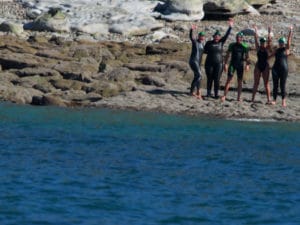